How Targeting Ads may make Employers the Target of a Lawsuit

In 1968, after a year-long fight by women’s organizations against the Equal Employment Opportunity Commission and some of the largest publications in America, including the New York Times, the EEOC determined that this practice of gendering help-wanted ads was contrary to the mandates of the Civil Rights Act and federal law — outlawing the practice for good.

Or so it seemed.  In today’s social-media economy, the ugly practice of limiting opportunities based on gender (or otherwise) is alive-and-well.  Facebook, and other social-media platforms, allow employers to specify the gender sought when placing help-wanted ads on the platform. 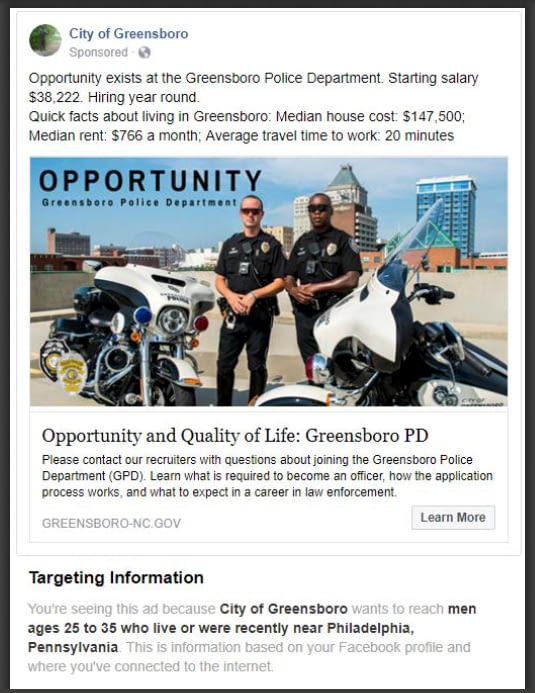 When an employer specifies a gender in its Facebook job posting, members of the excluded gender do not see the ad.  Unlike in the 1960s when women knew of the job-openings but were discouraged from applying because the job was categorized as “for males,” women (or non-binary individuals) looking for jobs on Facebook may not even be aware that employers are discriminating against them.

These charges cannot be news to Facebook.  In 2016, the social-media platform came under attack after a ProPublica investigation demonstrated that Facebook allowed discrimination based on race and “ethnic affinity” in the areas of housing and credit.  While Facebook allegedly took steps to prevent groups from engaging in racial discrimination following the ProPublica investigation, it looks like the platform is still not doing enough to prevent employers and other individuals from discriminating on the basis of race.

And so it goes with gender — not only did Facebook know two years ago that it’s targeted ads were in conflict with federal law, it took no proactive steps to ensure compliance.  The fact that employers are allowed to exclude women from viewing their help-wanted ads is not a mere “technical issue” for which Facebook was simply not placed on notice until now — the platform is specifically designed to aid in such discrimination.

While it is “important to note that online platforms like Facebook are generally not liable for content published by others,” says ACLU attorney Galen Sherwin, “Facebook is doing much more than merely publishing content created by others.  It has built the architecture for this discriminatory marketing framework, enabled and encouraged advertisers to use it, and delivered the gender-based ads according to the employers’ sex-based preferences.”

Discrimination in employment on the basis of race, color, religion, sex, national origin, age, or disability is strictly prohibited by federal law.  In addition to the categories listed above, it is unlawful for an employer to discriminate on the basis of creed, marital status, status with regard to public assistance, familial status, or sexual orientation under Minnesota state law.

If you believe that you’ve been discriminated against on the basis of one of these categories, call us today:  612.349.2729.

For more information on this story, click here or here.