California’s Proposition 8 is struck down – what next? 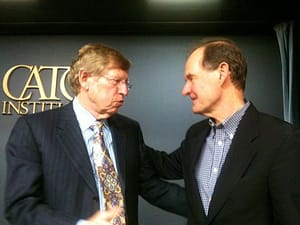 Ted Olson and David Boies teamed up for equality

Last week, Judge Vaughn Walker issued a highly anticipated ruling in Perry v. Schwarzenegger striking down California’s Proposition 8 – which amended California’s state constitution to restrict marriage to “a man and a woman” – on the grounds that Proposition 8 violated the U.S. Constitution’s Fourteenth Amendment.  This first edition of the Madia Law newsletter seeks to examine the impact of this decision on potential civil rights actions alleging discrimination on the basis of sexual orientation.

What was the reasoning of the Perry decision?

The “due process” clause mandates that when the government passes legislation that burdens the exercise of fundamental rights, the government regulation must survive a very exacting review to ensure that it is narrowly drawn to accomplish a compelling governmental interest.  Marriage is a fundamental right, so, in this case, Judge Walker applied “strict scrutiny” to Proposition 8 determine whether it was narrowly written to achieve important governmental objectives.

The “equal protection” clause seeks to ensure that states cannot deprive any person of equal protection under the law.  Generally speaking, unless legislation creates a classification based on highly suspect criteria – such as race or religion – courts will presume the law is valid provided that it is simply rationally related to a legitimate governmental interest.  Courts have traditionally demonstrated a high degree of deference when applying this “rational basis” test for classifications other than race, religion, ethnicity, and in some cases, gender.  The Supreme Court has never held sexual orientation to be a highly suspect class, so Judge Walker analyzed Proposition 8 in the context of whether it was merely rationally related to a legitimate governmental interest.

Judge Walker held that Proposition 8 could survive neither the “strict scrutiny” nor “rational basis” tests of the Fourteenth Amendment.  He found particularly important that the proponents of Proposition 8 failed to establish any evidentiary basis for the purported governmental interests they claimed were served by the proposition.  He noted that Proposition 8’s proponents did not even call to testify many of the witnesses they originally claimed would provide evidentiary foundation to their case.  Further, the judge dismissed the testimony of the proponents’ chief expert, founder of the Institute for American Values think tank, David Blankenhorn, on the grounds that he had no educational background in psychology, sociology, or anthropology, and his purported expertise regarding the effects of same-sex marriage was based on “reading articles and having conversations with people, and trying to be an informed person about it.”

Judge Walker contrasted the lack of evidence presented by Proposition 8’s proponents to the parade of psychologists, economists, historians, social epidemiologists, and political scientists presented by the plaintiffs to establish that no secular purpose supported Proposition 8.  Judge Walker concluded that there was no evidence California had any legitimate interest in excluding gays and lesbians from marriage.  He further found that “many of the purported interests identified by proponents are nothing more than a fear or unarticulated dislike of same-sex couples.”

What does the Perry decision mean for regulations in other states discriminating on the basis of sexual orientation?

Many states have passed state constitutional amendments or other regulations similar to Proposition 8.  Several states, including Florida, Mississippi, and Utah have passed legislation regulating or prohibiting the ability of gays and lesbians to adopt children.

The Perry decision does not serve as legal precedent to invalidate those laws because it comes from a different jurisdiction.  However, parties will cite and use the reasoning and analysis in Perry when attempting to persuade courts in other states to invalidate such regulations.

Specifically, parties will likely use the unusually detailed analysis by Judge Walker of California’s purported governmental interest in Proposition 8 even under the traditionally forgiving “rational basis” standard of review.  For example, parties challenging laws banning gay and lesbian adoption of children may use the Perry example to force state officials defending such legislation to produce a solid evidentiary basis demonstrating the state’s legitimate interest in such bans.  “Tradition” alone cannot suffice as a legitimate state interest.  If Perry is an indication, defenders of such legislation may have a difficult time providing a substantive evidentiary basis justifying such laws.  Parties may then use Perry to encourage courts to engage in a detailed review of the lack of such evidence in order to invalidate the laws, even while applying the traditionally deferential “rational basis” test.

Will the Perry decision have any impact on cases involving sexual orientation discrimination by private employers?

Not on private employers – but most certainly on government employers.  Perry struck down discriminatory legislation in California based on the Fourteenth Amendment.  Because the U.S. Constitution restricts actions by the government – not private actors – Perry will likely not serve as controlling or persuasive authority in employment discrimination suits, unless such suits involve a government employer.

In just such a case, Madia Law has teamed with another firm to represent a former police officer alleging discrimination on the basis of sexual orientation against his former police department employer.  Because the police department is a government employer, we have been able to allege several causes of action, including violation of the Fourteenth Amendment’s “equal protection” clause.  The Perry decision will certainly serve as useful precedent in our case.